One of the most popular destinations in Greece, the capital of the Dodecanese region. Rhodes is a cosmopolitan island with a traditional side that combines classic beauty with spectacular scenery. A place where once Colossus of Rhodes, one of the wonders of the ancient world, stood tall, and where the UNESCO World Heritage site of the Medieval city is waiting to be explored. Read More...

A fun cruise around some of the best beaches of the island from the North side.

A beautiful boat trip to the picturesque island of Symi and the nearby monastery of Panormitis. 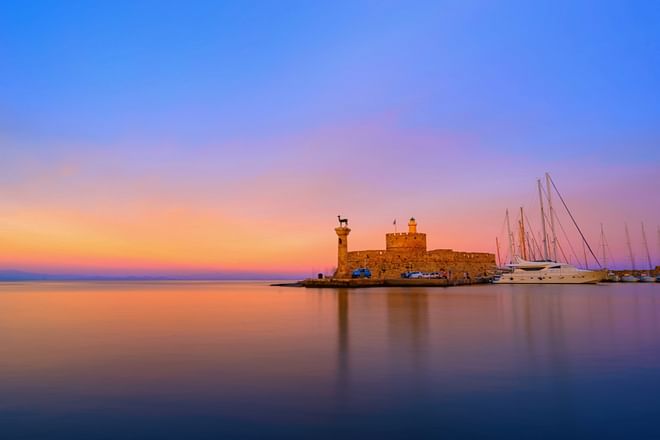 Rhodes by night with mini cruise

An evening experience of the illuminated city of Rhodes!

‘THE ISLAND OF THE KNIGHTS’

Rhodes is a cosmopolitan resort with a history of 4000 years. It is located in the SE end of the Aegean and is the biggest island of the Dodecanese with an area of 1400 sq. km and a population of over 122.000 inhabitants. The city of Rhodes is built in the northern end of the island and has all the characteristics of a modern city with a history that varies from the Antiquity to the medieval times and from the Byzantine to the Recent Years. At the entrance to the harbour (Mandraki), two deer made of copper are standing in the place where according to the tradition the Colossus was located, one of the Seven ancient Wonders of the World. The Medieval Town of Rhodes (the Old Town) is  recognized by UNESCO as a World Heritage Site and is an integral piece of the city of Rhodes. Within the Medieval walls, you can admire squares with fountains, museums, art galleries, churches, Turkish baths, the Palace of the Grand Master or the famous Street of the Knights. The Old Town constitutes a living piece of the past and the heart of new Rhodes as it is the only inhabitable Old town in the world. Rhodes has a large International Airport and a developed network of maritime transports.

The island is full of unique and beautiful places, such as the traditional village of Lindos with its beautiful Acropolis. Don’t miss “The Valley of the Butterflies” were millions of brown and orange butterflies visit a beautiful forest on the summer months. The Medieval city of Rhodes is a must walk for every visitor and the historic center with its unique buildings. Prasonissi is an experience by itself were you can see the two seas joining over golden sand to separate Rhodes from its small islet-sibling at the south most part of the island. A tour of the medieval castle fortifications is a great way to explore Rhodes as seen through our amazing Island tour

All Tours on Rhodes

A fun cruise around some of the best beaches of the island from the North side.